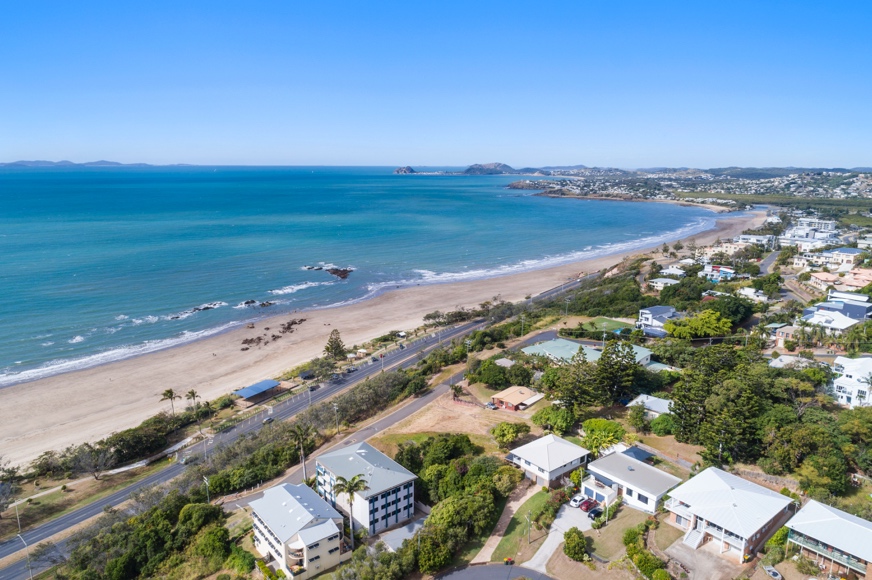 The trendy coastal town of Yeppoon is the hub of the Capricorn Coast, only 38km from Rockhampton. The Yeppoon foreshore is the ideal place to admire the beach, sparkling blue sea and offshore islands. Complete with the fantastic Keppel

Kraken zero depth water park, Yeppoon Lagoon, play grounds, pathways, and plenty of room to enjoy a bite to eat. Try one of Yeppoon wonderful cafes or restaurants, or explore the great selection of boutiques, gift and home wears stores.
"Yeppoon" is local Darumbal Aboriginal word meaning "the place where the waters meet".

The first European to reach the area was Captain James Cook who sailed past in May 1770. He named Great Keppel Island and Keppel Bay (after Admiral August Keppel) and Cape Capricorn.

Baumann Park is named after the first superintendent appointed to Yeppoon Hospital, Dr Ernest Harris Baumann. Dr Beaman practised medicine in the town for 21 years, from 1922 until his death in 1943.

Born and educated in England, Dr Beaman undertook his internship at the Rotunda Hospital in Dublin after completing his medical studies in 1892. In 1895, he was admitted to the Royal College of Surgeons. Upon migrating with his family to Australia in 1908, he worked briefly in Victoria and New South Wales before coming to Queensland and setting up practice at Bundaberg. He enlisted for service during the First World War as a surgeon with the Royal Australian Navy.

The building on the corner of Normanby and Mary Streets, commonly referred to as “the old post office”, was in fact the third post office in Yeppoon. It was opened in 1924 after Yeppoon’s population growth as shown in the 1918 census, justified the provision of upgraded postal services.

Yeppoon’s first post office was opened in 1883 and was located in Thomas Perkins’ “Yeppoon Hotel” on the corner of Hill and Queen Streets. As postmaster, he received an annual salary of £12, while also running his hotel. Mail was received from Rockhampton once a week.

The present Anzac Parade at Yeppoon’s Main Beach originally consisted entirely of sand dunes. There was no road, no foreshore recreational facilities and no direct beach access apart from crossing the dunes on foot. Yeppoon Hospital was located near Ross Creek at the far southern end of the esplanade. It was erected in 1917 as a convalescent home and commissioned as a hospital in 1922, but could only be accessed from central Yeppoon through sand dunes, along the beach or on a track through the mangroves.

During the 1920s, there was a move to erect a memorial to “the sixty-eight brave lads” who enlisted locally in the First World War. At first, a row of trees along the main street was suggested and the first planting took place in April 1920 with a public appeal for funds to finance name plates. In 1928, the Yeppoon branch of the Returned Soldiers and Sailors Imperial League of Australia (forerunner of the RSL) offered £320 towards construction of a marine parade as a memorial and asked Council to subsidise the project. Council agreed to assist and a committee was formed. A proposal was prepared and costed the following year, with the R.S.S.I.L.A. providing £320, Council £380, with another £300 to be raised by public subscription via a Citizens’ Committee.

Yeppoon was declared a town reserve in 1867, but the railway was not constructed until 1909. It was opened on 21st January, 1910 by Queensland Governor Sir William MacGregor. A line to Emu Park had opened in 1888, and from that time the residents and businesses of Yeppoon (particularly the Farnborough sugar mill) had been calling for an extension through to Yeppoon. Tanby, on the Emu Park line was the nearest rail point but was difficult to reach. Goods including sugar had to be carted in wagons, pulled either by bullocks or horses along unmade roads. Finally, after surveys in 1890 and 1900, work commenced in 1908 on a route through Mt Chalmers and Cawarral goldfields, reaching Yeppoon in December 1909.

In Yeppoon the line was built alongside James Street and required the closure of parts of Arthur and Park Streets. At the time, this was on the outskirts of town in an area with space for handling livestock and other freight. As well as the station, the railway precinct included cattle yards, storage sheds, a goods shed, engine and carriage sheds, Stationmaster’s house and other houses.